I came across a blog that had a list of 25 things about the author. I've done these lists before, only the last one I did was 100 things. 100 things was a pain in my ass, mostly because it's surprisingly difficult to come up with 100 things about yourself that other people would find interesting. 25 sounds much more reasonable so here goes:

1. When I'm in an extremely happy mood, I will dance all over the house and sing my head off. Of course, I have to be alone to do this, otherwise the crazy might show and my "normal person" cover will be blown.

2. My second degree was in Animal Management (aka zookeeper school) and I got to live my dream of working with exotic animals; rhinos, elephants, tigers and orangutans among others. It turns out that wasn't a dream I wanted to live long term. I loved it, but ultimately it wasn't for me.

4. I know I've mentioned how reading is a passion of mine. Sometimes I can't put a book down because if I do, I'll miss the characters too much. Don't even get me started on how I feel at the end of a series...

5. I have to admit it... I love young adult fantasy novels. There I said it. Not so much the Twilight series, but books like the Alchemist, Eon/Eona, Harry Potter, etc. Kinda can't get enough of those.

6. Tea is, by far, the most satisfying drink I could ever have. If I do not have a cup of tea in the morning, I'm lost. There's nothing in the world that sitting down and having a cup of tea won't fix, except, perhaps a broken leg, it won't do a damn thing for that. English Breakfast and Chai are my favorites.

7. There is no finer color in all the world than green. At least not to me. My favorite shades are probably hunter green and green with hints of blue. I guess purple and blue aren't so bad either, and certain shades of red (ok, so, I like a lot of colors). Least favorite color: pink.

8. I'm happiest when I'm outdoors on a warm summer day, with the sun shining and me sitting in the shade of a tree. It wouldn't hurt to have a bit of water around too. This picture just about sums it up...

9. I have an unnatural love of office supplies. New pens, fresh notebooks, blank paper... love. I think I love pens so much because I used to practice my handwriting constantly when I was younger and different pens either made my handwriting better or worse. I had to try them all!

10. I've written in a journal since I was in the 8th grade. That's seventeen years worth of journaling. I've gone back and read some of the ones I wrote when I was 13...wow. 13 year old me was a silly, silly girl.

11. The least enjoyable situation I can think of is being at a party where I don't know anyone. I am a timid wallflower and that's all there is to it. (Of course, my friends know better, but that's  because I don't show just anyone my outgoing side!)

12. I'm a vegetarian. People always ask me why and it's a combination of reasons. I suppose it's because I believe too much meat isn't healthy for your body or for the environment, not to mention the system doesn't generally take the animal's welfare into consideration. Of course, I'm also the last person to judge anyone on their lifestyle, so if you're a meat-eater, more power to you! My best friend thinks that bacon is godly which is why she sent me this as a joke:

13. Aside from an occasional Rum and Coke in college, I haven't drank soda of any kind since I was a junior in high school. Don't get me wrong, I'm no health nut, I can down a pint of Haagen Dazs with the best of them, but soda upsets my stomach.

14. I don't have any cavities in my teeth. See #13, I think it's directly related. (Not to mention all the cavities I've ever had fell out with my baby teeth. Oddly enough, my last baby tooth fell out when I was in the 9th grade... While we're on the subject of teeth, I've never had braces, but I did need all of my wisdom teeth to be taken out. I suppose my mouth wasn't as big as my mother was always telling me it was, go figure.)

15. I'm often mistaken for being much younger than I am, sometimes as much as five to ten years younger. There are worse things in life I suppose. Though trying to convince me of that when I was in college was a difficult task indeed.

17. I can't stand shower curtains touching me while I'm showering. I don't care if it's as clean as the day it was made, that horrible, wet plastic sheet clinging to me in the shower makes my skin crawl. I have a claw foot tub, so the curtains goes 360 degrees around me. I've come up with some pretty innovative ways to keep it off me, one of which backfired and spilled water all over the floor, but that's a story for another time.

18. I almost never listen to music on the radio. Pop lyrics with no substance just doesn't do it for me. Give me Death Cab for Cutie or any number of singer/songwriter, indie folk bands any day.

19. I've never been a religious person. I believe there are as many ways to connect with God as there are people in this world. I'm still discovering my path, but I don't like people telling me it's wrong because it isn't like theirs. 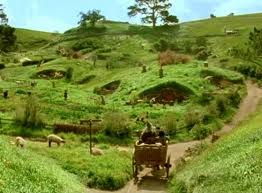 20. I've been to lots of different countries: Canada, England, Scotland, Wales, France, China, Bermuda.. and still I haven't seen enough of the world. I'd love to visiting New Zealand (secretly it's because I want to visit Hobbiton, don't judge me!)

21. I've never dyed my hair. I can't guarantee that this will always be the case seeing as how I've spotted a few grays in the last year to two...

22. I go days without watching any TV. I don't have cable, I barely have any local stations and I'm perfectly content with that. Netflix is my friend. I just can't stand commercials. Ever since college (when I learned to critically think about things) I've noticed most commercials are ridiculous and if they are to be believed then men don't care about anything but beer, sex, sports and pizza and women only care about keeping a clean home, raising children and nagging men. (Stepping off my soapbox now...)

23. When I'm thinking deeply about something, I rub the tops of my fingernails. It's a habit I picked up when I was a little kid. Half the time, I don't even realize I'm doing it!

24. I don't have any tattoos. It's not that I think anything bad about them, a lot of them can be extremely beautiful. I just have a healthy aversion to pain and I can't think of anything I'd want permanently embedded into my skin.

25. I'm having a hard time coming up with the 25th one! I guess we'll just have to leave it at that.

There you have it. That paints quite the picture of me. I hope you all have enjoyed it! Back to our regularly scheduled knitting program next time!
Posted by Erin at 5:19 AM

Email ThisBlogThis!Share to TwitterShare to FacebookShare to Pinterest
Labels: Life