The tale of my (somewhat) green thumb.

I've never considered myself a "green-thumb." Most of the time I kept plants alive, but they never really thrived. I'm not sure why. I watered them, put them in places I thought they'd like, but they always just sort of hung out. They rarely bloomed or sprouted new leaves. I didn't take much time trying to figure it out. They weren't dying, that was about all I cared about. My apartments just weren't right for them I supposed.

I've never bought plants except for an African Violet here or there (which, I must admit, I never did well with even though I'd heard they were impossible to screw up...) Most of the plants are ones I've acquired from friends or family who've moved out of town, or in my brother's case, out of country! Others were gifts from my mother, like a tiny little orchid that was absolutely adorable.

Since Sam and I moved into the apartment we're now living in, I've noticed quite a change. All my plants love it here, which has stirred a kind of love in me of watching the plants do well. I have a spider plant which my cat, Ludo, decimated several years back. Ludo is the kind of cat who loves to chew on grass. Spider plants are definitely grass-like and if it was in his reach, he was chewing on it. In this apartment, that spider plant has taken off, it's grown about ten shoots with baby spider plants on the ends.

My african violet finally started blooming and hasn't stopped for a good two or three months! I even got an orchid that I've had since my brother moved away grow new leaves, tons of roots and finally flowers! I can't tell you how excited that made me! And that tiny little orchid my mom got for me bloomed as well.

I truly never thought I'd get so much enjoyment from watching plants thrive, but I suppose we have more sides to ourselves than even we're aware of.

Last weekend Sam and I were getting ready to head out for our weekly grocery store run when we heard a crash in the kitchen. Ludo had gotten on the counter where the orchids are so he could better reach the spider plant babies. In the process, he knocked over my tiny orchid which fell on the floor. The flower stem broke off and one of the leaves, but the rest was intact. I nearly started crying. I was heartbroken.

I was angry at Ludo (though it wasn't like he was trying to knock over the orchid, but he was trying to kill the spider plant again!) and I was just sad that all those days I spent watching the plant grow and the buds get bigger and bloom only to see it damaged...

Needless to say, Sam and I rearranged some things to get the spider plant out of Ludo's reach so this won't happen again. And because Sam is the most awesome boyfriend ever, I came home to this on Valentine's Day:

He knew how sad I was about the tiny orchid, so he went out and bought me a new one. It's not tiny, but it is awesome! I've never seen one like it before and I don't know the first thing about all the different kinds of orchids there are. All I know is that I like them and I can finally grow them!

I'm beginning to see a bit of green on my thumb.... 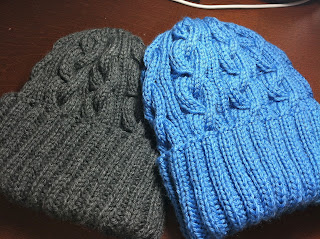 As for knitting, I haven't been doing too much of it except for the hats I was commissioned to make. I've finished two of the three so far. They are quick knits and I'd probably be finished with all three of them if I hadn't gotten caught up in the book I'm reading. I finished the their Game of Thrones book: A Storm of Swords. Woah, that man can write. I certainly got caught up in it and couldn't put it down. Poor Sam hasn't seen much of me this week except for sitting on the couch devouring my book! Thankfully, I finished it, which just makes me want to pick up the next in the series, but I'll hold off. (The house won't clean itself and I'd prefer to have clean clothes to wear) If only I could be a hermit who reads and knits and grows plants all day!
Posted by Erin at 8:37 AM