Just the other day I had the urge to look back at my old blog and see what I spent my days writing about. There's so much in there. It seems like a different life. The majority of it was when I was in school getting a second degree, this one in Animal Management (which is a glorified way of saying zookeeper school.) Most of my days were new adventures filled with different experiences, or so it seems by looking back at the blog. I also had a lot of emotional ups and downs when it came to relationships. I didn't hold back, I wrote about it all. Ever-present was the knitting and the spinning and crafting. It seems that is my rock throughout my life. It's brought me joy, connection, and warmth. Everywhere I've gone, I've never been without my knitting and I never dreamed I'd meet so many amazing people through it.

Why did I stop writing in my old blog? It's hard to say exactly why, but I have a feeling it has everything to do with my parents separating. I was 25 or so. At the time, I thought I was old enough to handle that kind of situation, after all, I was a grown up. What they did with there life was their choice. The reality is it shook me to the core. All my beliefs about relationships were shattered. It didn't help that at the time (or very close to it) I went through a break up of my own. The kind where you're certain you're going to spend the rest of your life with this person you fell for only to discover they don't feel the same way you do. I was completely side swiped.

I don't know if that's the true reason I stopped writing, but it seems like it. I suppose the reality was too difficult to put into words and share with the world. What I'm discovering is that bottling it up inside and pretending everything was fine and dandy wasn't the smartest idea I've ever had. I realize now, it's important to let those things out. Confiding in someone helps release those energies. Even though it's been so long now, I still recognize that there are still some things I need to let out. There are still some old hurts rattling around inside.

Though I will say, I've come a long way. Just about three years ago I started a job at a local vet clinic, which has had it's ups and downs, but ultimately I enjoy it. Around that same time I met someone. He was funny, sweet, had the same interests I did. The first time we met we spent the entire time talking until 2 in the morning! I knew I'd like to get to know him better from the first moment I met him. In fact, I knew I wanted to be in a relationship with him. He wasn't ready for that, having just come out of a hard relationship himself. So we decided to just be friends. We spent the better part of a year "just being friends." I was in and out of another relationship in the mean time (again, not one of my better ideas.) It seems after that relationship ended, Sam started realizing that I had the right of it from the beginning! We've been together ever since. 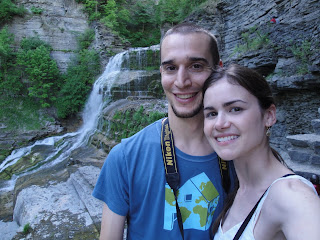 Up to this point, I've been keeping this new blog pretty light. Nothing too personal, nothing too important. Amazingly, I've found it's really hard to write that way. Or I should say, it's really hard to write anything important or interesting that way. When I sat down to write this post, I didn't even know what I wanted to write at first, then it's like my fingers couldn't keep up with my brain. It all just flowed out.  I reminded me of how I used to write and that I still have that spark inside me. For awhile there, I thought it was gone. I suppose I just had to uncover it.

Life can be messy, it can show up in ways we never expected. There are major ups and downs, but throughout it all, it always helps to have people to share it with.

Email ThisBlogThis!Share to TwitterShare to FacebookShare to Pinterest
Labels: Life